The Difference between Sudden Cardiac Arrest vs Heart Attack 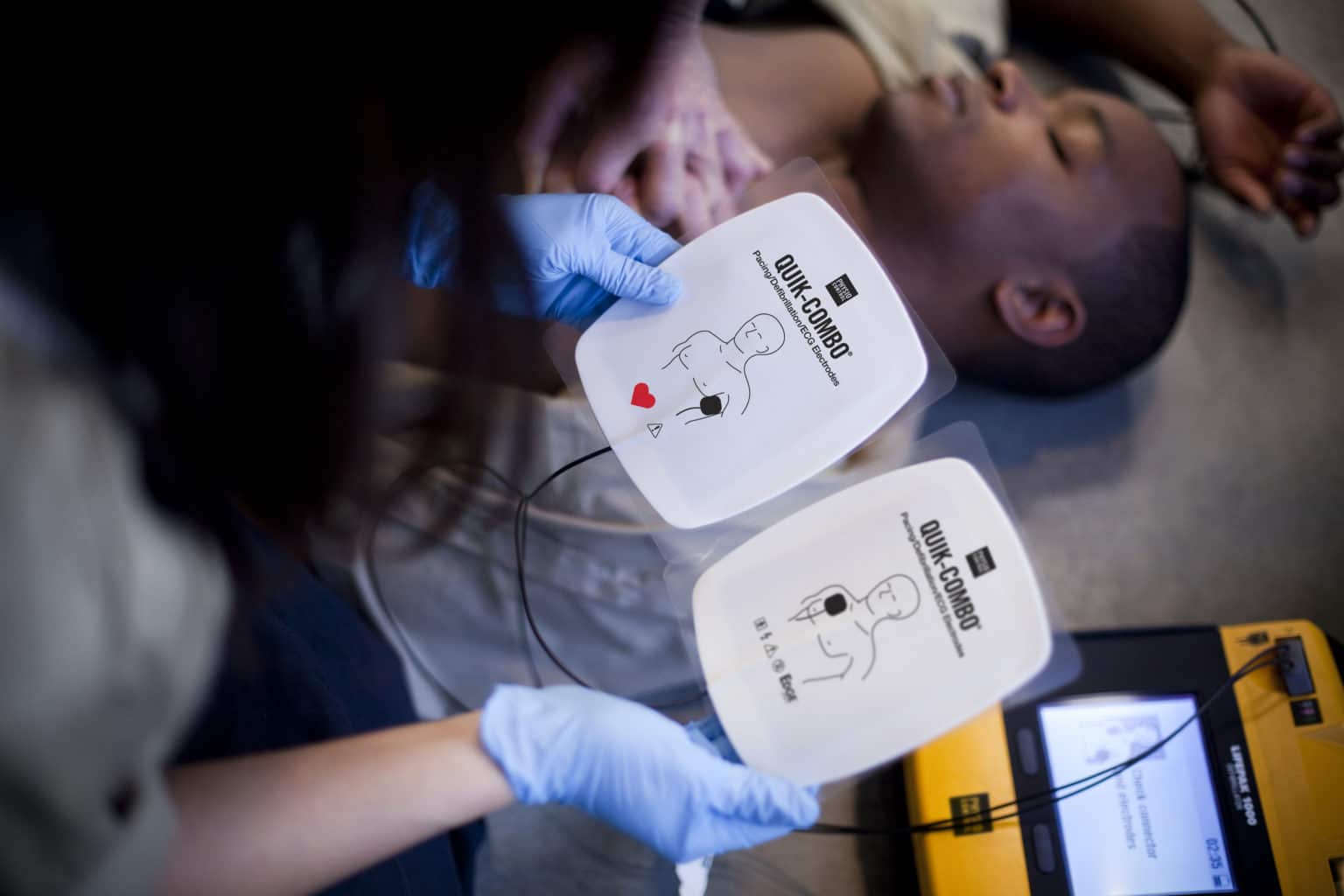 Although the terms cardiac arrest and heart attack are used interchangeably by non-medical professionals, the reality is that these two conditions are entirely different.

Sudden Cardiac Arrest kills roughly 90% of its victims and survival is almost wholly dependent on how fast aid can be rendered. For each passing minute after an SCA event begins, the victim’s chances of survival diminish by 10%. There are an estimated 356,000 Sudden Cardiac Arrest cases annually in the United States alone.

Make no mistake, yes, a heart attack can kill you. Annually in the United States, there are an estimated one million heart attacks.  However, roughly 86% of heart attack victims survive the episode. 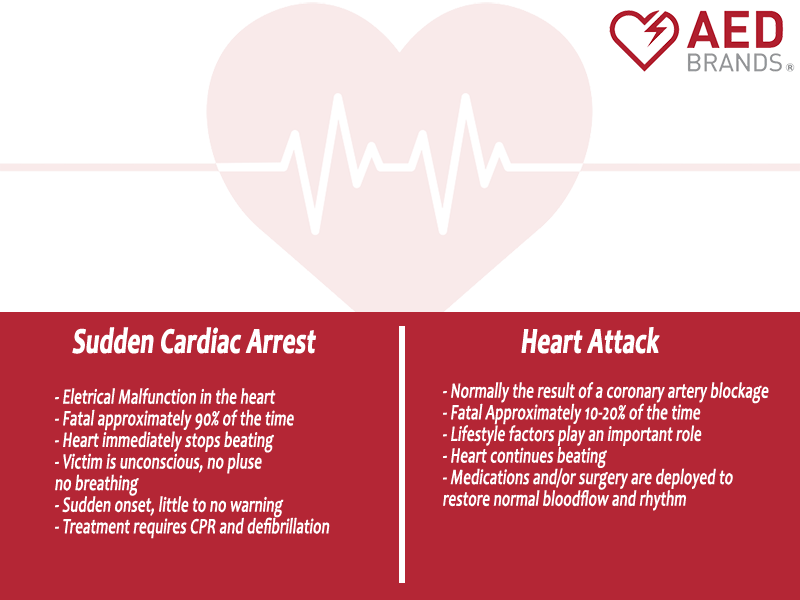 Sudden Cardiac Arrest is an electrical malfunction of the heart that causes the heart to stop functioning and pump blood to other parts of the body. The electrical malfunction causes an arrhythmia or irregular heartbeat which can literally stop the heart leading to the heart no longer functioning. Shockingly, SCA is the number one cause of natural death in the United States, resulting in around 356,000 adult deaths in the United States each year and every year.

The usual main cause of Sudden Cardiac Arrest is an abnormal heart rhythm called arrhythmia.

The Mayo Clinic describes the technical aspect of the cause of SCA as a rapid, erratic electrical impulses cause your ventricles to quiver uselessly instead of pumping blood (ventricle fibrillation).

Who is at most risk for Sudden Cardiac Arrest

While Sudden Cardiac Arrest can occur to anyone at any given time, studies show that people with pre-existing conditions such as coronary artery disease, enlarged hearts, myocarditis, valvular heart disease, congenital heart conditions or electrical problems in the heart are at higher risk.

Obesity, smoking, blood pressure concerns and a family history of heart-related issues can raise the risk of SCA.

Studies show that those over the age of 45 are at an increased risk of SCA overall, however roughly 7,000 minors each year suffer SCA each year.

What are Symptoms of Sudden Cardiac Arrest?

Sudden Cardiac Arrest symptoms usually onset rapidly with little to no warning. Usually before a victim collapses, there are a few moments that indicate shortness or breath or chest pains.

Unfortunately, the time period between the beginning indicators and the victim becoming unconscious is very narrow, if at all.

The lack of a heartbeat or breathing are two indicators for responders to look for as it could be the green light to deploy an Automated External Defibrillator.

Other symptoms may include:

Sadly, yes. And it is not as rare of an occurrence as one may think. Sudden cardiac arrest is the number one most common medical cause of death in athletes, with a global incidence of around 1 in 40,000 to 1 in 80,000 athletes each year.

Approximately one-third of athletes who have suffered and survived a SCA reported having chest pain, shortness of breath, performance decline, palpitations, pre-syncope, or syncope prior to the event.

Congenital/Genetic or acquired heart abnormalities may play a role in athletes with sudden cardiac arrest, such as; myocarditis, Kawasaki’s, valvular heart disease and more.

What is a Heart Attack?

A heart attack is an entirely different cardiac event. A heart attack occurs when blood flow is stopped by a blockage in one of the arteries. The symptoms of a heart attack also start much earlier, sometimes as earlier is a few weeks, days, or hours before and the heart may not fully stop during a heart attack. Heart attacks are also risk related to people with known heart disease, obesity, or other medical conditi

Heart attacks are primarily caused by blockages in the coronary arteries. Buildups of fatty deposits, commonly referred to as plaque, prevent the flow of oxygen-rich blood to the rest of the body.

Contrary to SCA, heart attacks are linked more to the lack of blood flow rather than an electrical issue.

Who is at most risk for a Heart Attack?

There are many factors that are taken into consideration when evaluating someone’s risk of suffering a heart attack. High blood pressure or cholesterol, obesity, diabetes, tobacco and alcohol use, age and diabetes are just some of the main risk factors for heart attacks.

Other attributing factors for heart attacks are poor diet and exercise, emotional stress and genes.

What are symptoms of a Heart Attack?

Generally, symptoms of a heart attack include several pain areas across the body. Most notably in the chest region but also may include the jaw area or left arm.

Women are more likely than men to have atypical symptoms which may resemble other conditions or last longer than men.

The types of pain range in several different ways. The most common is a “clenched fist” type of pain in the chest region.

Contrary to Sudden Cardiac Arrest which has little to no immediate symptoms, heart attacks typically give off explicit warning signs.

Why use an AED for Sudden Cardiac Arrest?

It only takes 10 minutes to die from SCA, and people assume that if EMS is needed they will make it in time to save a victim from SCA. However, the American Heart Association (AHA) has confirmed that in order for an SCA victim to survive, defibrillation must take place within 3-4 minutes of cardiac arrest. AHA has also confirmed that an EMS call–to-shock time interval of <5 minutes cannot be reliably achieved with conventional EMS services. What this means is, if there is not an AED readily available near the scene, the victim will most likely die from SCA.

You're all done! See your recommended AED's below.

The best AED for your needs

Would you like these results sent to your email?

If so, just fill our your email address below and submit.